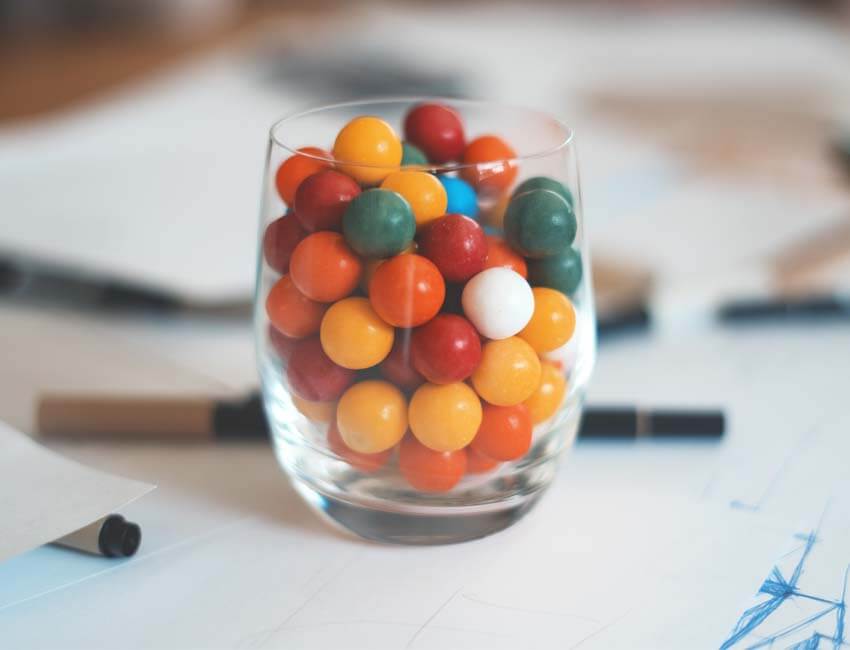 Towards the end of the Stone Age, when the teeth were used as tools, a man by the side of Li River in western Finland chewed a piece of birch bark tar, and possibly discarded it somewhere in his settlement. 5000 years later it was recovered with his well-defined tooth imprint upon it. So, our craze for chewing gums is as old as the hills. Ancient Greeks’ chewing gum was called “mastiche.’’ It was the sap of a tree called mastic. People of Mayan civilization used to chew chicle, the sap of the sapodilla tree. Chewing gums were natural back then, and as time passed, they turned synthetic. But why have we been chewing on the gums for so long? Studies suggest that chewing gums help us to deal with stress and anxiety. For this reason, chewing gum was an emergency ration during World War 2. Chewing gums also give the feeling of freshness to the mouth. But as we know, anything we put into our mouth is having not just a psychological effect. They affect our oral as well as overall health. Let’s check some adverse effects of chewing gums on our oral health.

Chewing Gums Can Cause Tooth Damage

Sugar-containing chewing gums are usually sweetened by a disaccharide called sucrose. Disaccharide or double sugar is a type of carbohydrate. Some bacteria present in your mouth including Streptococcus mutans and Lactobacillus can metabolize the sucrose. When you chew the sugar-containing gums, it coats the teeth with sucrose and the bacteria work on this coating to produce acids that destroy the enamel. This leads to cavities.

Chewing Gums May Trigger Temporomandibular Disorder in Your Jaw

Temporomandibular joints (TMJ) are the two joints on either side of your jaw. They connect the jaw to the skull. Temporomandibular disorder (TMD) is the condition in which you feel pain and discomfort in the temporomandibular joints and the associated muscles. TMD is caused by several reasons ranging from teeth grinding to joint problems in the jaw like arthritis. If you are a serial chewer of the gums, you need to worry about TMD. Studies suggest that the long spells of gum chewing may increase the prevalence of TMD. TMD manifests several symptoms including headache, toothache, earache and neck pain. Excessive gum chewing, especially on one side of the mouth, may lead to the overuse of jaw muscles and joints on that side. This will cause pain in the jaw. If the pain and discomfort in the jaw persist even after you stop the gum-chewing habit, consult your dentist to rule out TMD.

“Too much of anything is bad for everything’’ is what makes the chewing gum a villain. The right type of chewing gum, when used moderately is actually having some oral health benefits. The American Dental Association recommends the use of sugar-free chewing gums having an “ADA Seal.” ADA seal ensures that the product has been evaluated for safety and efficacy. Chewing the sugar-free gums after the meals is beneficial because it helps in increasing the flow of saliva to the mouth. This salivary flow helps to prevent tooth decay. Sugar-free chewing gums also improve the symptoms of dry mouth. Though the safe and moderate use of chewing gums is beneficial for your mouth, you shouldn’t use them exclusively for cleaning the teeth. ADA states that gum chewing is not a substitute for brushing or flossing. It is recommended that you should brush twice a day using a fluoride toothpaste and floss once a day to keep your teeth clean. Also, get them deep-cleaned by your hygienist at least twice a year. Proper maintenance of oral health is essential for a good-quality life.